Ok, where to begin? Let’s catch up a little here. You know that we moved a couple weeks ago and since then, things have just been a mess. Honestly, we moved at a pretty inopportune time. Brandon was in the middle of studying for his Professional Engineer board exams and took his exam one week after we moved. So, our whole moving process was really put on pause for the first week while he stayed at work until 9 and 10pm studying. We got everything inside and I unpacked the essentials, but that was about the extent of our progress. 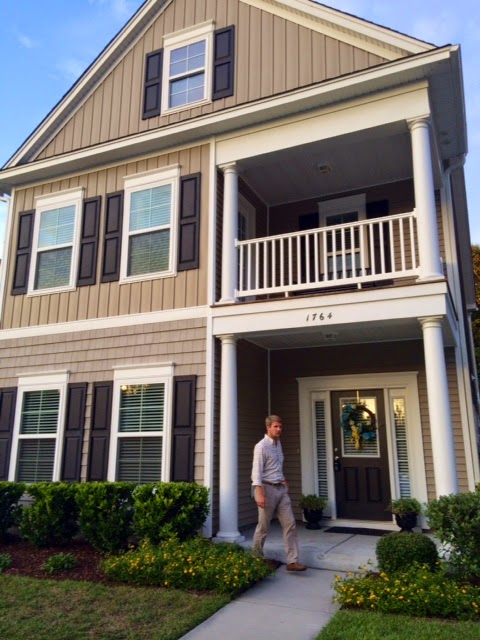 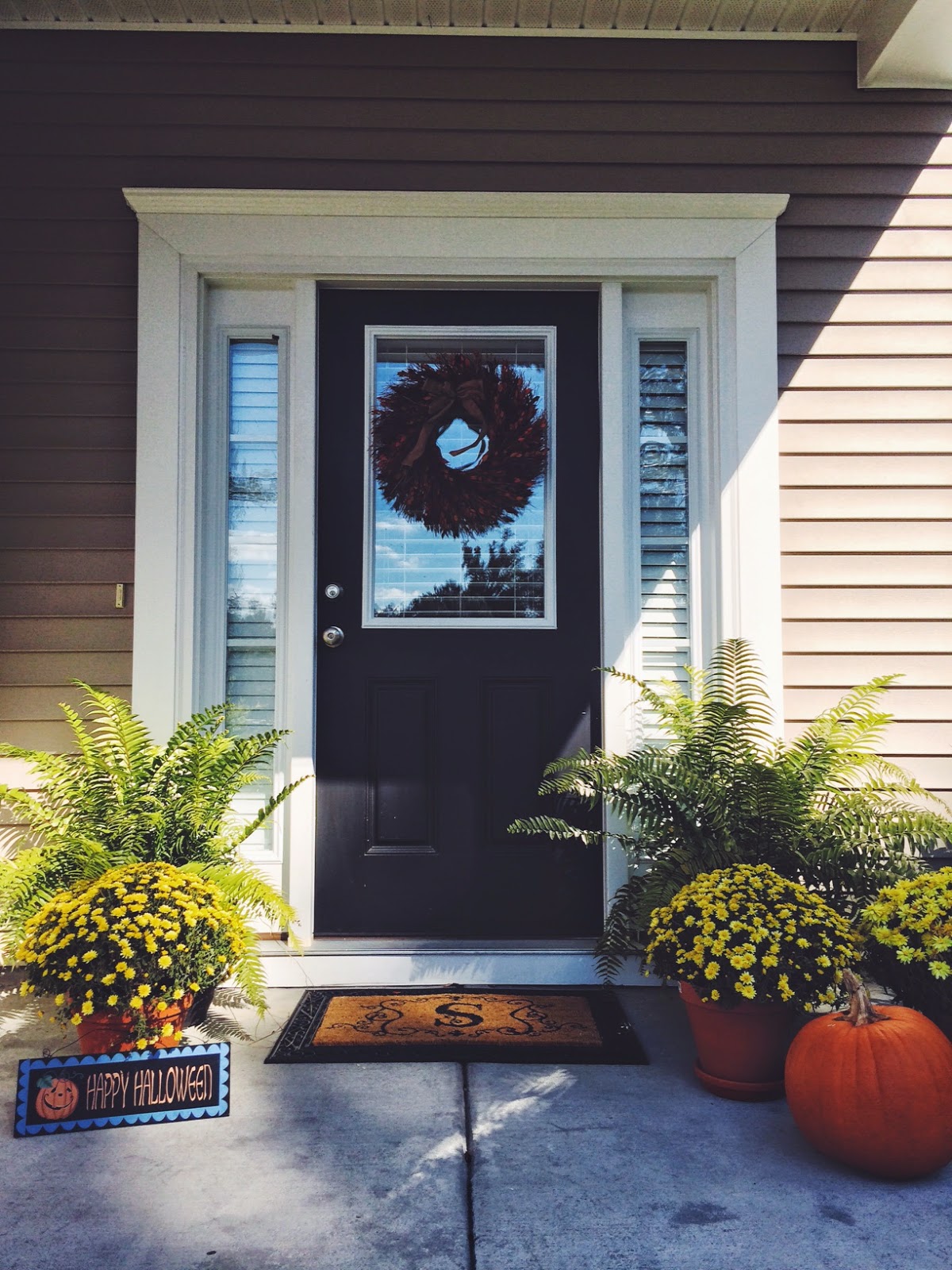 Meanwhile, we didn’t have much going on on the furniture side of things because before we moved, I sold our dining room table and living room furniture on Craigslist. We were ready for a change and (I) figured it would be best to go ahead and get rid of them then because it would be that many things fewer to move. So the first order of business was shopping for living room, dining room, and eat-in-kitchen furniture. All fun stuff, but woah, talk about a hurting on the wallet after getting all of that at once!

I had a very clear idea of what I wanted—a white slipcovered sofa and loveseat. Before, we always had a sofa and two chairs, which looked lovely but wasn’t the most convenient set when we had guests because seating was limited. Brandon, apparently the more stylish out of the two of us, said he didn’t want slipcovered furniture (boo!) or a loveseat… he wanted to stick with the sofa and chairs option because of how put together it looks. But I was afraid to get a light colored sofa that wasn’t slipcovered. That just seemed like a disaster waiting to happen since we have a furry gray cat and will have babies in our future.

Read more by clicking below!

Long story short… we shopped around at GDC Home, an amazing store here in Charleston, and quickly found a light greige sofa that has a thicker texture to it. It isn’t white, but it’s still light and because of it’s thicker textured fabric, it seems easy take care of. Boom! Easy enough. Then we found these amazing chairs in a linen fabric and you’d never know it by looking at them, but they recline! So it’s great for having guests or for when Brandon and I don’t want to sit on the sofa together while watching a movie. We found a great compromise and now have beauty and comfort, which is key for me. 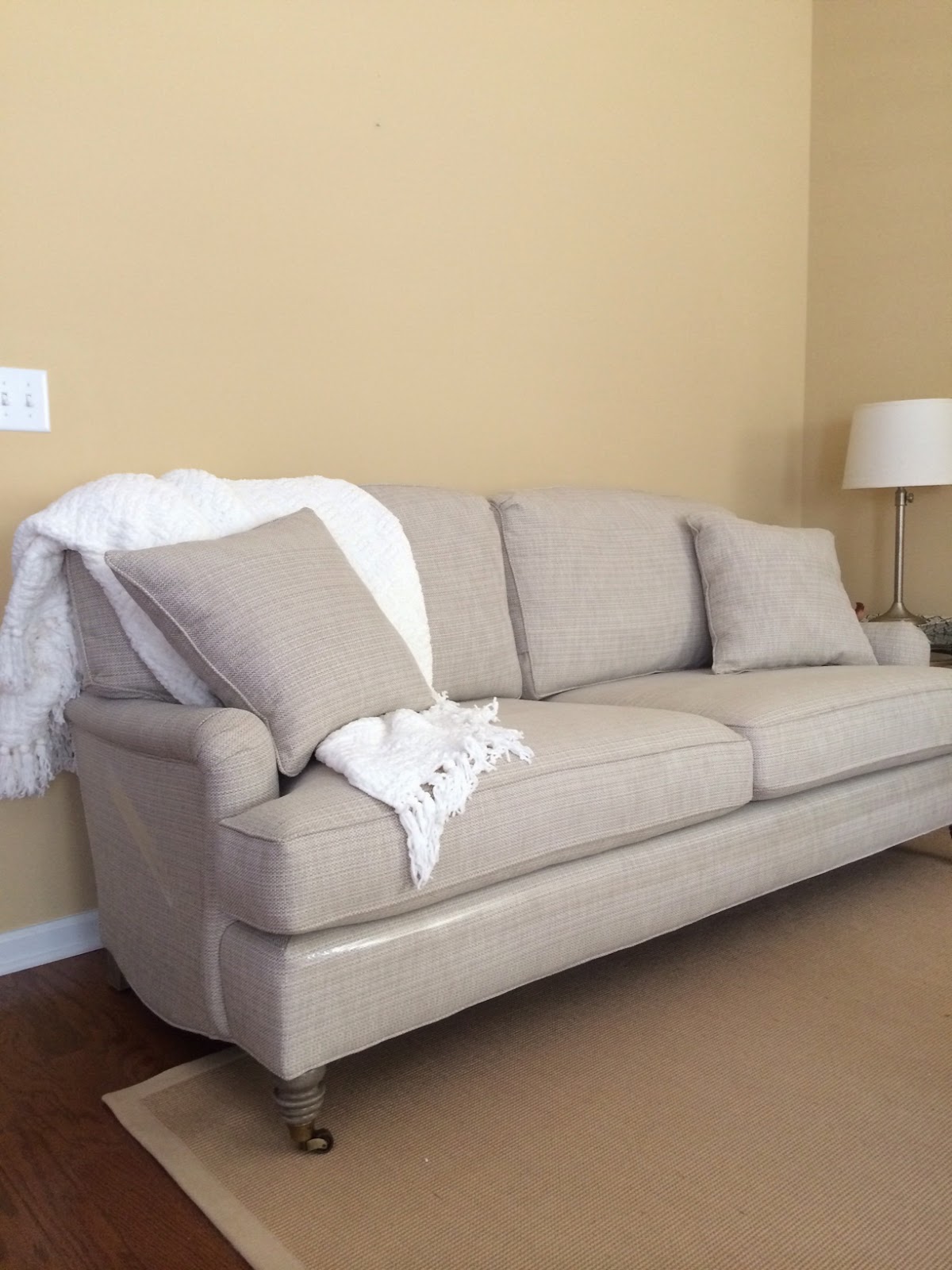 Now I just need to shop for great pillows and take the
pieces of double sided tape off the sofa, which I stuck on there to make
sure Winston didn’t want to pick at it. Luckily, he hasn’t tried. (The
tape is called Sticky Paws

Ah. I love that it’s on casters. 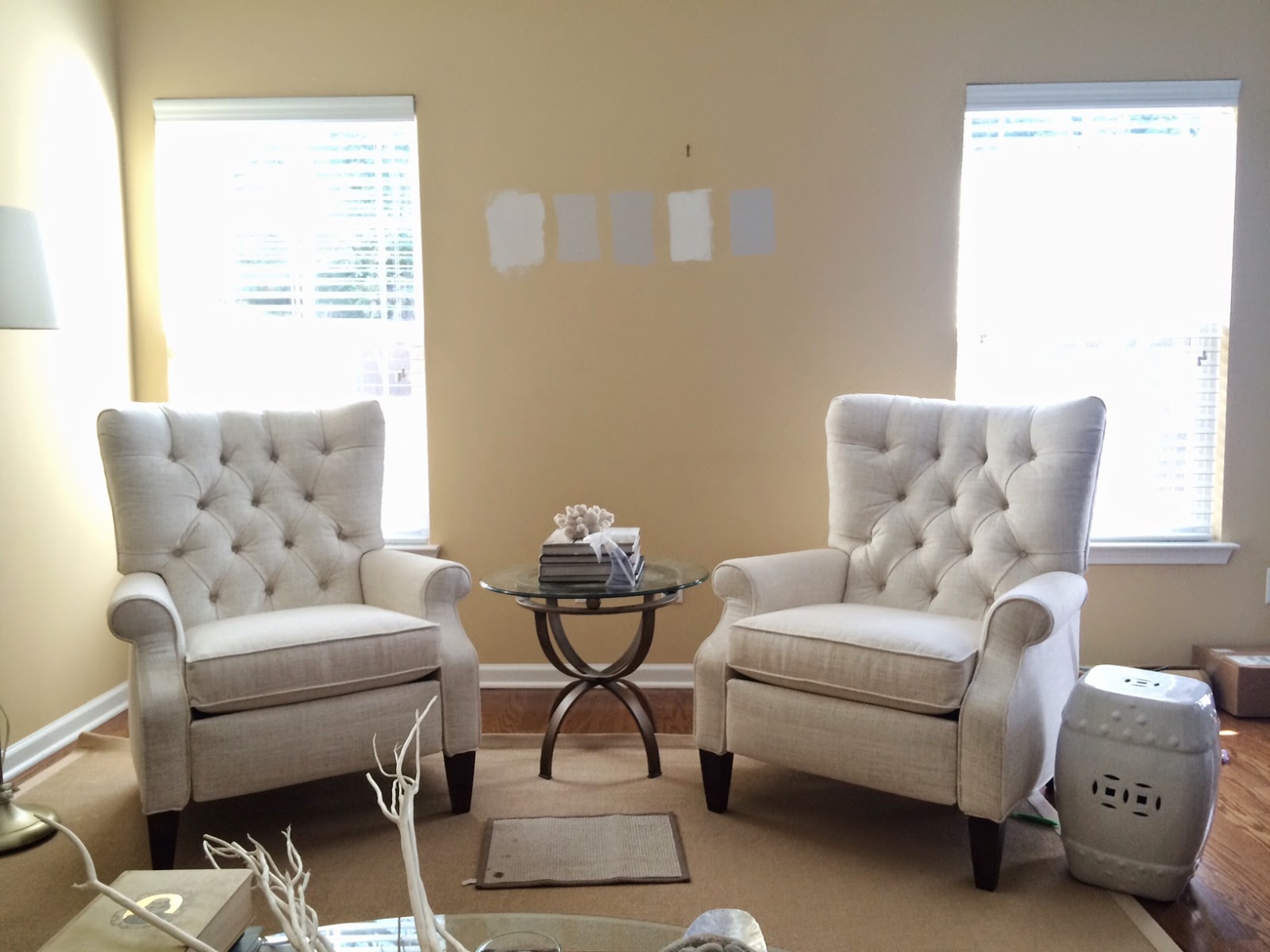 Pay no attention to the random stuff all laying around. We definitely have not gotten to any styling yet, but look …they recline!

We also scored a great dining room set off of Craigslist. I originally wanted a large farmhouse table with white, upholstered chairs, but once we got in this house, I completely changed my mind. Since we have a formal dining room, I really want to give it a traditional look with a modern take. So I scratched the farmhouse table idea and we got this one pictured below. The best part is this table came with two 12′ leaves
we can add in and two additional chairs, so we will have plenty of room for hosting
friends and family. She’s not in all her glory right now, but once I finish the look I have visualized, I really feel like it’s going to be the perfect vibe for what I want. I’ve already ordered a large sisal rug for under the table and I’m thinking about long, white linen drapes, gold framed art, white accents all over, a new chandelier and as I’ve mentioned before, a light gray paint color. I’d also love to recover the cushions on the seats, but that probably won’t happen too soon from now. 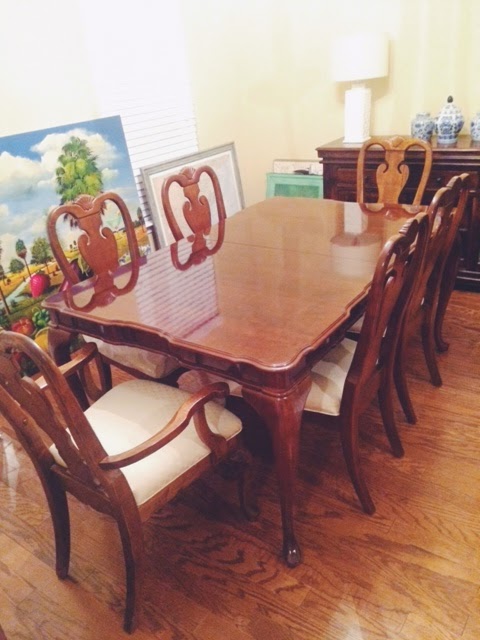 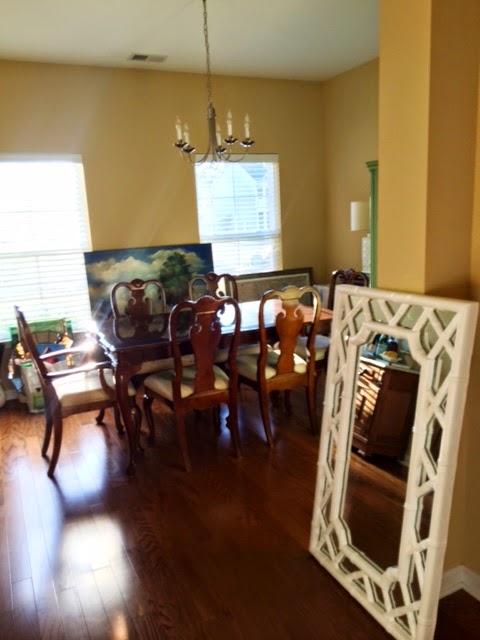 I paired the two additional chairs with our eat-in kitchen table and I kind of love the mismatched look. Eventually, I want to get bamboo chippendale chairs, white upholstered chairs, or even lucite chairs, but this totally works for now. We’ve got bigger fish to fry… 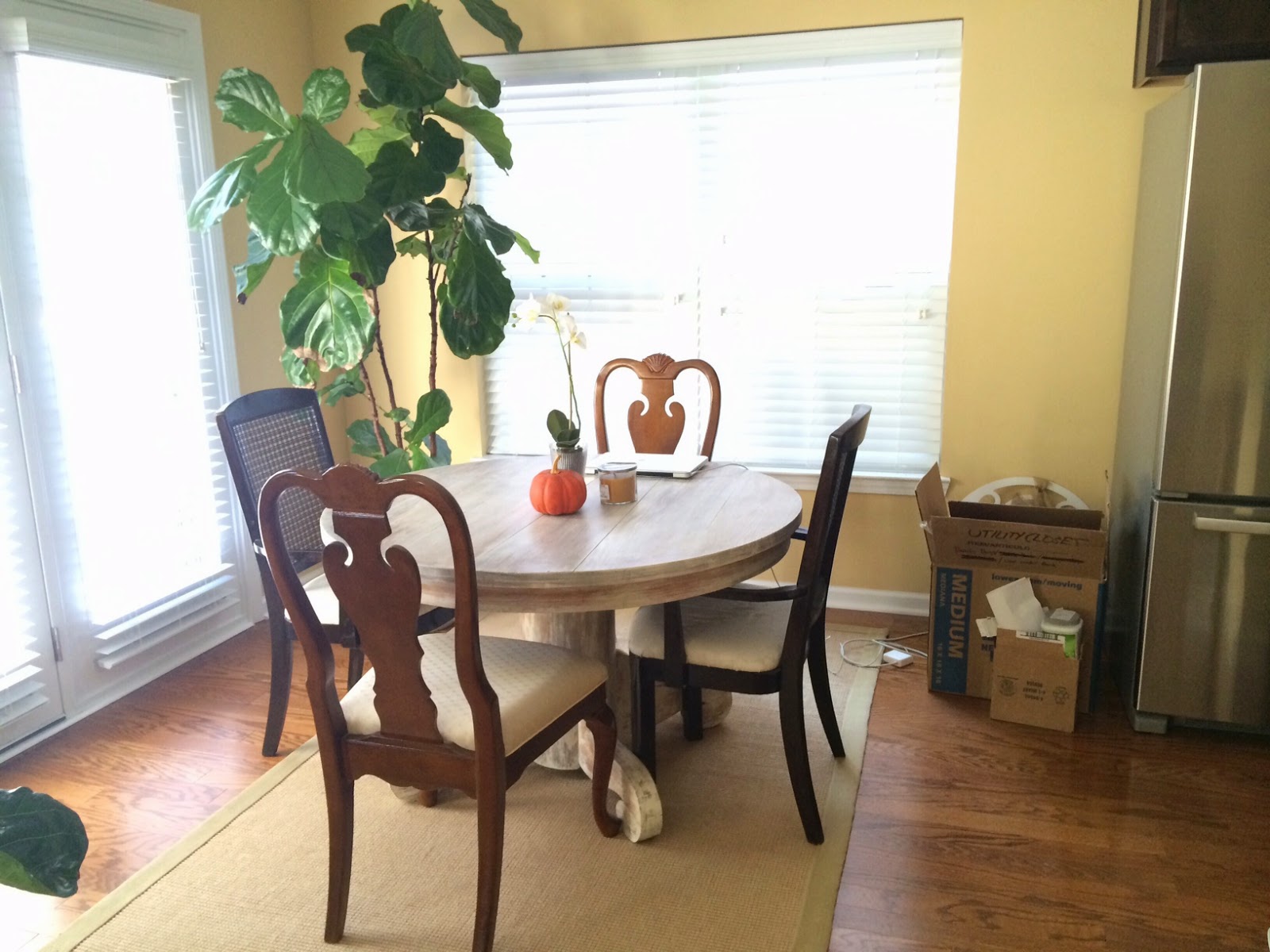 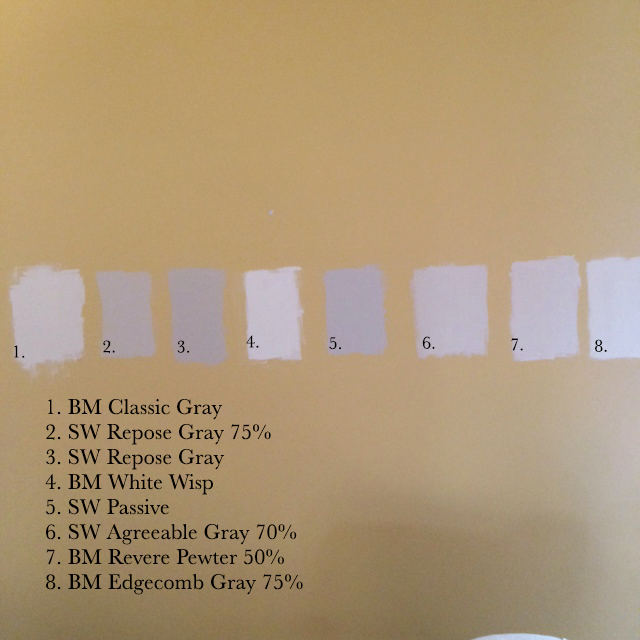 I know it doesn’t help that the walls are currently a golden hue, but all of these supposed “warm grays” look so cool to me! Well, except for Edgecomb Gray. That’s the first one that actually appears to be warm to me. In just looking at the swatches, I just knew Repose Gray was going to be the winner. 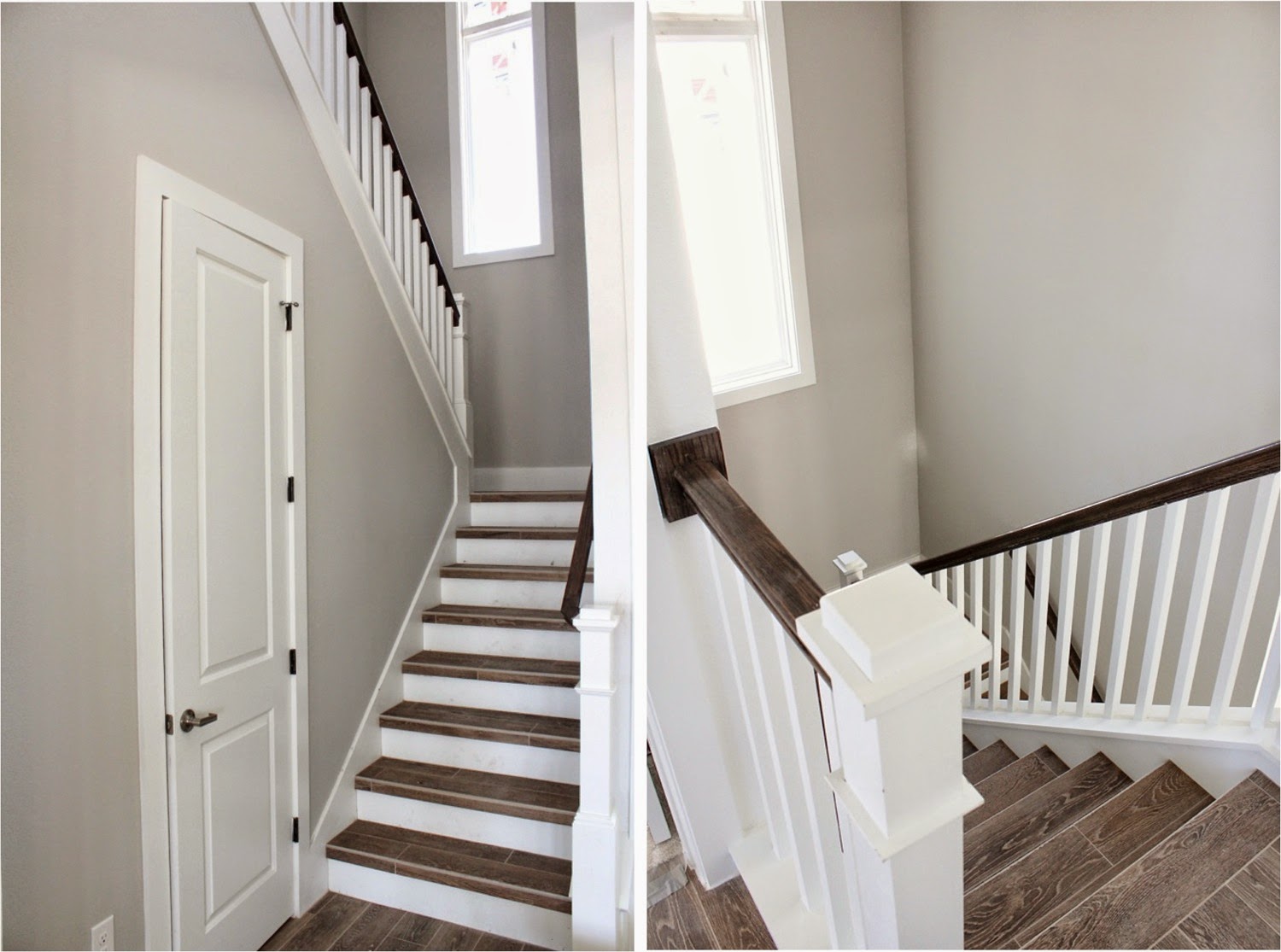 But it looks like cement on our walls. It’s so blue! Again, it’s probably due to the contrast between the golden beige walls and the gray swatches, but still. You’d think the warm paint underneath would warm up the gray. Not happening.

We are now going on our fifth trip to the store to get samples and I’m determined to pick a winner. The photo below shows the same paint colors swatched upstairs in our master bedroom. 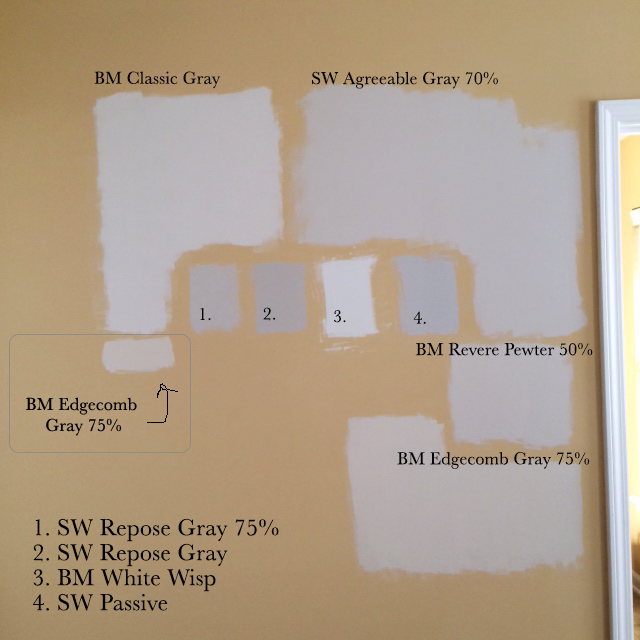 Classic Gray was my other “I know this will be it” color, but it looks so much cooler on the walls than on the swatch and in photos I’ve seen online. It’s still tied with Edgecomb Gray, as of now, as the winner. We used to have Revere Pewter on our walls in the condo we rented (remember?), but it looks so much cooler on these walls. We are going to paint the entire house, except for the bedrooms, bathrooms, and my office, whichever gray color we choose. The half bath and guest room/bath are being painted right now, so I will share those before/afters with you next time!

Shew. I am such an “I-need-instant-satisfaction” type of person, so this whole process is such a test of patience for me. We have great plans for this house, but I’m learning that it’s going to take a great deal of time. Once we get it painted, get window treatments done, pictures on the wall, and at least a little styling done, I will breathe a little sigh of relief. Until the next project, that is.

Oh, some of you asked me about whether Winston is used to being outside or if this is a new thing. He has been playing outside (while I’m watching him) since he was a little kitten. He loves playing outside and in fact, he sits by the door after he eats his breakfast until I let him out. He’ll usually go outside for about ten minutes everyday—sometimes more—but just in the fenced in back yard! 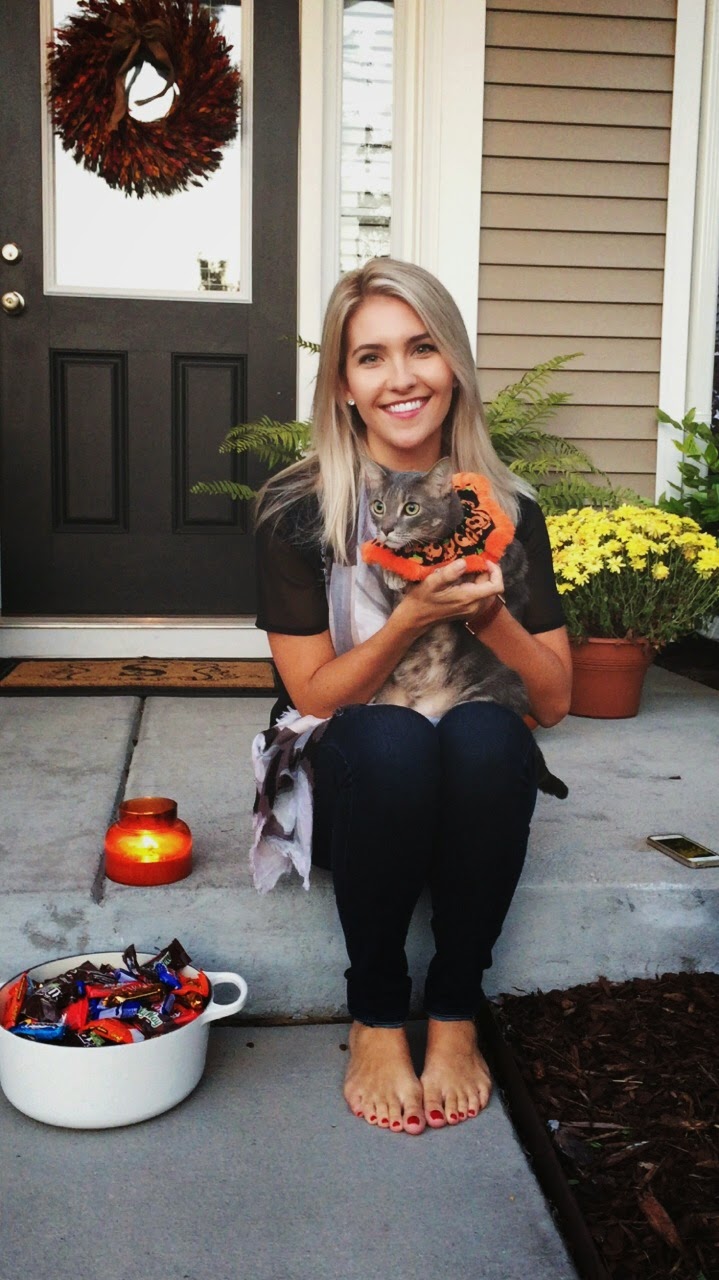