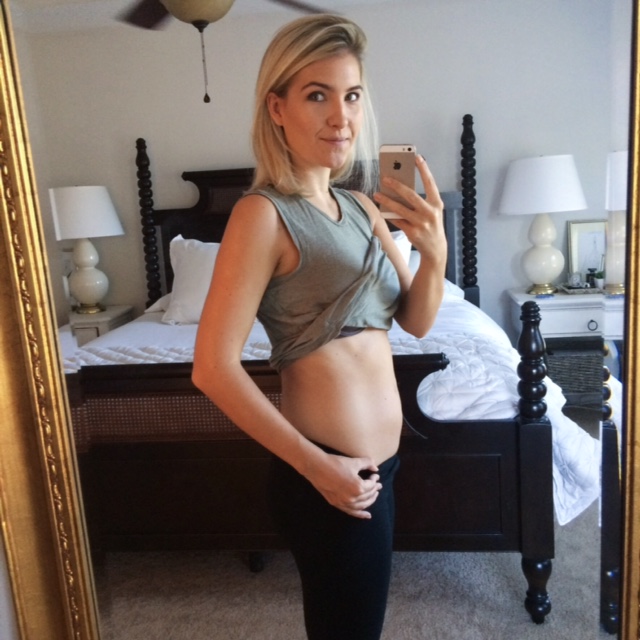 Ok, let me preface this. I am so not the cutesy type or enough of a planner to have Brandon take my bump pictures with me holding a sign giving you all the stats. So you may have to get used to selfies, ha! Also, let’s just go ahead and put it out there that the shirt will most likely be coming down as I get further along. 🙂

Baby’s size? About the size of a peach or a lemon. Around 3 1/2 inches from crown to rump.

Total weight gain/loss: So far I’ve gained about 6 pounds. My weight naturally fluctuates a good bit from bloat and I put on that six pounds right at the very beginning of pregnancy. It has just stayed the same since. I do think it was a lot of bloat at first, but now I think it has just transitioned into actual weight gain if that makes sense because I don’t feel as bloated anymore.

Maternity clothes? Nope. My favorite pair of jeans still fit, so those have been getting a lot of wear. Otherwise, I am using the good ol’ hair elastic around the pants button trick so that I can wear my pants unbuttoned. My tops & stretchy clothes all fit fine.

Sleep: A-ok! I do have to wake up around 7am to use the restroom, which ends up being a nice natural alarm clock.

Best moment this week: We bought a fetal heartbeat doppler to check in on Baby’s heartbeat at home once in a while. (Because I’m a paranoid mama already.) We’ve used it three times in the past week, just for about a minute each time. I was able to let my mom hear the baby’s heartbeat, which was awesome!

Miss Anything? I have to admit. Tailgating at these Clemson football games would be a little more enjoyable with a glass of wine! Also, at the game in the cold pouring rain, I got so hungry for a hotdog, but couldn’t get one at concessions because of the nitrates.

Movement: Not yet, I don’t think. I’m so afraid I’m going to miss the flutters I could/should be feeling at this point and mistake them for digestion or something!

Food cravings: The only thing that’s new for this week is caramel apples, which sent Brandon on his first grocery store run for cravings! Still craving fruit. Also grape juice, which I split with water!

Anything making you queasy or sick? Nope, thankfully.

Gender: We still don’t know, but could find out as early as next week. We may wait until 16 weeks just to be sure. Brandon won’t tell me what he thinks we’re having because he thinks it will be the opposite of what he thinks! I really thought boy at first, but I swear my intuition has been telling me girl for the past month or so. Goes without saying, but we of course would be overjoyed with either—just praying for a healthy baby!

Symptoms: Headaches and sleepiness. The headaches are happening pretty much every single day—and they are bad. I absolutely hate taking tylenol, but I have to have it almost every day once the feeling starts or else I’m miserable. Otherwise, I feel great other than still being exhausted. It’s NOTHING like it was in the first trimester. I want to say I started getting energy back at about 11 weeks, but I still don’t feel like my old normal self. Naps are still my friend.